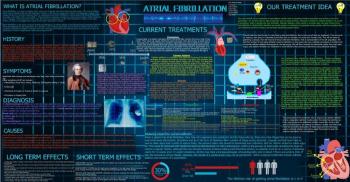 Teams of up to six students were invited to design an ePoster to illustrate a strategy for bringing hard sciences and biomedicine together to reduce the number of deaths and disabilities caused by heart and circulatory disease.

The Peter Symonds students created the poster in the summer of 2021 and were then selected to give an online presentation, after being placed in the top 10 out of nearly 50 competitors. The team were congratulated for their contribution by Professor Dorian Haskard at Imperial College.

Speaking about the experience, student Ariyan Hoque said “It was a great activity to do together as a team, given that we would need to work together to run Future Medics this term.”

Maisie Sheffield added, ‘It gave us a great insight in the process of carrying out research and will be really beneficial when we move on to study at university.”