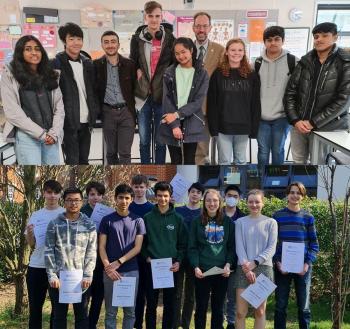 Peter Symonds students have excelled in the recent British Science Olympiads. Fifteen students won medals or were commended in the British Biology Olympiad, with one student making it to the National Biology Olympiad selection team, and five students won medals in the British Physics Olympiad, with one of the group placing in the top 100 nationally out of a total 2100 entrants.

Upper Sixth student Nathaniel Joyce qualified for the second round of the competition, putting him in the top 16 students from the whole UK, drawn from a field of over 8000 entrants. Nathaniel, who is planning to go on to study Biology at Bristol University, said, “I learnt so much during the Olympiad, from identifying plant families to how to dissect under a microscope. I took part to challenge myself, and in the National Finals ended up with the most difficult and rewarding experience I've ever had.

“I strongly recommend taking part. Having gone up to Warwick for the finals over Easter, I feel much more prepared for the challenges and experience of studying Biology at university.”

Many of this year’s Biology students who entered were Lower Sixth students, making the gold, two silver and 5 bronze medals they won all the more impressive, given that the competition is aimed at students in the second year of their A Level programme. These results are the College’s best results in nearly a decade and best Lower Sixth results ever.

Twenty-nine Peter Symonds Physics students took part in the one-hour Physics Challenge Competition for first year A level students. They faced a number of difficult questions, written specifically to challenge students' problem-solving skills, and presented in a variety of styles.

Students were awarded one gold, four silver and twenty bronze medals in the competition, which is designed to stretch students to their limits, challenge them to grapple with new ideas and deepen their thinking in the subject.

Many students had been working on similar problem solving tasks in small groups through the Physics Extension Enrichment Activity, which helps students prepare for competitive university courses in Physics and Engineering.

Upper sixth student Dominic Exworthy did exceptionally well, placing in the top 100 nationally out of a total 2100 entrants and being put forward to compete in both Round 2 of the BPhO and also in the British Astronomy and Astrophysics Olympiad.

Commenting on his achievement, Dominic said, “All three papers rigorously tested my understanding of taught concepts in Physics, mathematical proficiency and ability to apply this knowledge to novel situations across the various fields within Physics. I genuinely enjoyed challenging myself to learn new concepts that were beyond the syllabus, and to develop solutions to problems, the type of which I had not encountered before.

“The Olympiads have indubitably improved my confidence and skills within Physics, and they have also piqued my interest in new areas of the subject, and beyond. I would absolutely recommend anyone interested in Physics, Engineering or similar fields of study to give it a go - you never know what may happen!”