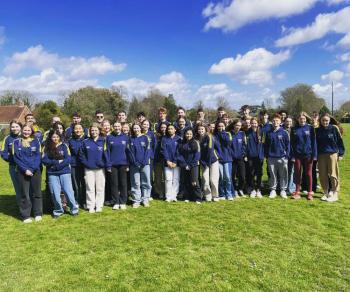 Students from PSC are celebrating a number of brilliant successes at the 42nd Association of Colleges (AoC) Sporting National Championships, which took place in April for the first time since 2019.

The AoC Sporting National Championships are the largest annual student sporting event in the UK. This year, more than 1500 students from 91 colleges took part in 12 different sports at the University of Nottingham, Nottingham Trent University and Willow Sports Centre, Derby. AoC Sport member colleges qualify to represent their region at the Championships through regional tournaments, hosted throughout the autumn term. As well as competing in their chosen sport, students compete for points for their region. The region whose teams and individuals accumulate the most points wins the prestigious Wilkinson Sword trophy.

Having been postponed for two years due to the Covid 19 pandemic, the 2022 AoC Championships were the first big event for PSC sports teams since 2019. The College took 57 students to the Championships, the biggest representation from the South East.

PSC students Lily Neate and Iszy Hinkley did extremely well in Cross County on an individual level too, with Lily winning gold in both races and Iszy winning silver in both races.

PSC was well represented off the field too, with student Alice Little (Women's Basketball) taking the prestigious role of South East Captain and Flo Studdert-Kennedy coming 5th in the Archon Fittest Students Competition.

Speaking about her role as South East Captain, Alice Little said, “I was given the opportunity to be the South East women's captain which for me is an amazing accomplishment as I was not only able to represent the college but also the women's basketball team.”

She continued, “There were many aspects of the AoC Championships that I enjoyed but especially the atmosphere between and during games and the support from other teams. Watching other sports that our college were participating in made my experience so much more entertaining and fun.”

Reflecting on the importance of college sport Alice said, “Events like this are extremely valuable as it is a fantastic way to end our college season and it develops team bonds. I think sport in college is enormously important as it enables students to create new friendships whilst competing at a high level.”

PSC alumni also played a role in the AoC Championships, with former student Joe Marchant welcoming students via video link during the opening ceremony, recalling his days competing at the event as a member of the PSC Men’s Rugby team.

At the end of a fiercely contested competition the South West Region were the winners of the Wilkinson Sword Trophy with the South East having to settle for third place.

Reflecting on the Championships, Sam Jones, Head of Enrichment (Sports Teams) and Sports Co Ordinator at PSC, said, “It was great to get back to the AoC National Championships for the first time in three years; it is such a big event in our sporting calendar. The 57 students we took were exemplary on and off the pitch. It was a great achievement to come away with medals for 4 out of 6 of our teams, cementing our place as one of the best sporting colleges in the country.”

About the AoC Sport National Championships

Exclusive to AoC Sport member colleges, the AoC Sport National Championships are a celebration of competitive sport in colleges, providing recognition, enjoyment and a unique opportunity for students to compete. They also remain the largest annual student sporting event in the UK, with nearly 1,700 college students taking part each year.

AoC Sport member colleges qualify to represent their region at the Championships through regional tournaments, hosted throughout the autumn term. As well as competing in their chosen sport, students compete for points for their region. The region whose teams and individuals accumulate the most points wins the prestigious Wilkinson Sword trophy.